Once you find the perfect Mr. Spock uniform shirt from the choices below, be sure to add a Spock wig and Spock ears to finish off your Starfleet look. You can also add a Starfleet phaser to complete your Spock Halloween costume or Star Trek convention uniform.

Only at Amazon: This is a top-of-the-line Grand Heritage blue science officer or medical department uniform for men. Boldly Go Where No Man Has Gone Before with the perfect Starfleet sciences or medical uniform shirt.

This version of the Mr. Spock blue uniform in the 2009 Star Trek movie style is more expensive than other versions, but not incredibly so, given the high quality and more integrated costume. It comes in Adult S, M, L, and X-Large (currently out of stock) and includes the blue uniform shirt with silver rank stripes, an integrated black undershirt that looks better than other costumes, and a Starfleet communicator pin.

Like other uniform shirts, it needs to have good black pants and loafers or boots, which you can find in our Accessories section, or use your own if they look realistic enough. The Star Trek style is not exactly off-the-shelf for today’s styles, which is why I recommend the matching add-ons. Wig and ears are also a strong complementary item.

Buyers in past years indicated that it has longer arms and wider shoulders and is really cut for men rather than the ladies. They also said it was quite comfy and the costume was very realistic. One reviewer said he’d actually seen the prop uniform and found the Grand Heritage costume pretty close to the “real thing.” Buyers of other versions said that if you wanted a costume for long-term use, the two-piece Grand Heritage version is the right investment to make. Most costumes are not made for more than one or two uses. 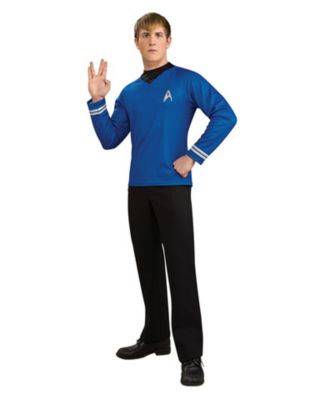 This highly popular deluxe version of the Mr. Spock blue uniform costume for men is cast in the Star Trek movie style. It has a solid rankings, with most ratings quite positive. It is a good value if the Grand Heritage one is out of your price range. It comes in M, L, and X-Large, depending on which site you find it at (only Spirit Halloween has it in just medium, and the others have either all three sizes or L and XL). You’ll get a comfortable blue uniform shirt with silver rank stripes, the Starfleet communicator pin, and an attached black dickie.

Like the other versions of a Spock costume for men, you’ll need to add black pants and shoes/loafers or boots. I recommend boots for a more realistic look. And don’t do tight bottom legs in the black pants. It ruins the usual line of the costume. For the best Mr. Spock costume, pants and boots are essential. Again, if you really want to do Mr. Spock right, a quality wig and ears are a big plus for the realism. Some reviewers recommended going with the black undershirt as an accessory since it completed the neckline better than the attached part.

Sizing was a problem for this version for a several guys, leading them to have lower ratings. They felt the quality was good and it was comfortable and not scratchy like many costumes, but they had trouble figuring out the right size and recommended ordering a little smaller. Most negatives in reviews related to the sizing being pretty large. The uniform shirt still appears a little long, but the embroidery is good and it is a solid costume. One reviewer felt that the uniform shirt didn’t breathe well but others felt the exact opposite. Your mileage may vary, I guess. Mainly, others commented on how comfortable, high-quality, stylish, and fun to wear it was.

In addition to Spirit Halloween, which has the best price right now by a small amount, you can find the Deluxe Spock Uniform (especially the larger sizes) at some of the other costume sites for reasonable prices if it is out stock at SpiritHalloween.com. These include Halloween Express and HalloweenCostumes.com.

While not the deluxe version of the Movie style costume, buyers still gave it a 4.5 out of 5 stars rating and felt it was good quality. Like the others, the uniform shirt comes in S, M, L, and X-Large. For this version, some found the sizing a little large and ended up getting a smaller size, but most said it fit pretty well. The costume includes the blue uniform shirt with the silver rank bands of the Star Trek Into Darkness movie style. The communicator is screen-printed on as an insignia, and they add a neat attached black dickie to round it off.

Like the other men’s Spock costumes, you’ll need to accessorize with stylish black pants and loafers or boots, which you can find in our Accessories section. Or you can use your own, but I like the style on the site better. Don’t forget the wig and Vulcan ears! Some users said they thought they could get away without the wig because they had black hair, but eventually realized they’d look better with the hairstyle of the wig. Users also liked the look of the ears as a costume enhancement.

Buyers gave this costume really solid reviews, with pretty much all 4 or 5 stars. Reviewers were impressed with the costume quality overall, although there was mixed feelings about whether or not it was “Star Trek Convention” or “Comic-Con” quality. One wearer even said people stopped him in the street to take pictures because the costume was so realistic!

If stock or price is an issue as you get closer to Halloween, you may also be able to find it in stock at Costume Kingdom.

This deluxe version of the Star Trek Into Darkness style is for Plus sizes, which can be hard to find. In fact, Costume Craze is currently out of stock on this item.  The price is a little higher even with the discount, but since the size is harder to find and plus sizes usually are a little more, it is reasonable. The Plus (Full) size states for Men (in inches: sizes 46-52 Jacket, 50 chest, 42-46 waist, 33 inseam). Like the deluxe regular sizes, it comes with the blue uniform shirt, silver rank bands at the wrist, the screen-printed communicator, and an attached black dickie.

Like other Spock costume shirt styles, you’ll want to accessorize with quality black pants with the flared leg at the bottom and solid black loafers or boots. The ones on the costume sites are quite nice, and unlike many modern style clothes in the store, often fit the costume styles better. The wig, ears, and phaser are also popular add-ons.

The reviewer said he had trouble finding plus size costumes and was really happy to find this at a reasonable price and with such high quality. He also mentioned how the material was well-made, comfortable, and stretchy, which was important to him with his size. He also felt the look of the costume was quite authentic.

This deluxe version of the The Original Series classic blue Mr. Spock costume has mixed ratings by reviewers. Anywhere from a 1 to a 5, which makes it hard to judge by score. Negative ratings tended to demean quality and the cut and “lay” of the fabric, while higher reviews thought the exact opposite, but did agree it runs a little tight, so order a bit large. Buyers reported that the costume is good quality and seemed a higher quality than other costumes they had tried elsewhere. Some said that the sizing charts appear to be a little small, so a slightly bigger size would be good.

It’s a mid-range price for adult costumes, and comes in S, M, L, and X-Large, but availability is different at different sites. The costume includes the uniform shirt with gold rank bands and the United Federation of Planets Starfleet embroidered emblem printed on the shirt where the communicator badge usually is.

You’ll need to accessorize with stylish black pants and black loafers or boots. You can find recommendations in the costume add-ons section if you don’t have a good match at home. Don’t forget the wig and Vulcan ears!

If you can’t find it at Amazon, you can also shop for sizes in stock at Halloween Express and HalloweenCostumes.com.

You can also find a Mr. Spock costume for boys, as well as infants and toddlers. With a boy’s Spock costume for Halloween, your child will be a fabulous Vulcan Starfleet officer while trick-or-treating. Better yet, do the Vulcan family routine and dress up Dad and the boys as Spock.

To really do up your Mr. Spock impersonation, check out these Mr. Spock uniform add-ons. You’ll fit right in with your Star Trek fan friends for Halloween parties or at the next Star Trek convention.

So whether you’re looking for a Spock uniform for Halloween, or a Mr. Spock costume for a Star Trek convention, you’ve come to the right place. Check out our Vulcan ears and wigs as costume accessories and finish off your perfect Spock costume for men.